On Friday, June 28, Justin ran some of his fastest times during practice and the team was feeling very confident for the race on Saturday. On Saturday, after the first practice run, the team worked extremely hard switching tires around to find the best balance for the car. Justin qualified 7th out of 17 cars. Once the race started, Justin pretty much settled into the 7th position holding onto a loose car. The top 7 cars did pull away from the field by at least 3 car lengths at one point. A wreck late in the race shuffled the cars in this top 7 group. Justin crossed the finish line in the 4th position.
At the track on Saturday, we received the tires for the race. For those of you unfamiliar with the rules for the Limited Late Models, the Limiteds run on used tires. Before practice, the driver pulls a number. This number is used as their qualifying order as well as for the set of 5 tires the driver receives for the race. Some races, the tires you draw are good; other times, not so good. On Saturday, our tires were not so good. In fact, one of the tires was blistered and was not useable. Lee Faulk Racing, however, is very proficient at measuring the tires and selecting the best position for each tire on the car.
A lot of people are asking us why we run the Limiteds with the fact they run on used tires and a lot of it has to do with the luck of the draw. The experience Justin is gaining is necessary in order to continue to advance his racing career. A driver must be able to handle the car on the track whether it is evil loose, too tight, has a tire going down, or has damage. A driver is not always going to have a perfect handling car. In fact, if you ask Justin he will tell you there is no such thing as a perfect-handling race car. You can always improve something. So is it frustrating when you get to the track and find out your tires are not the best? Of course it is. But it is also good to know that Justin is part of a team that can rally and come away with a solid finish at the end of the night. He definitely learned a lot on Saturday by having to drive such a loose-handling car. Justin’s next race is Saturday, July 20. He has one more scheduled after that on August 3. We are still actively looking for marketing partners to work together to promote products and businesses. Justin would very much like to race in the Fall Classic on 9/28/2013 at Hickory Motor Speedway. This is a 100-lap race for the Limited Late Models. If you would be interested in advertising your business and/or website for this race, please call Sherri at 724-516-6325 or email at TurnLeft@AllianceRacing.net. 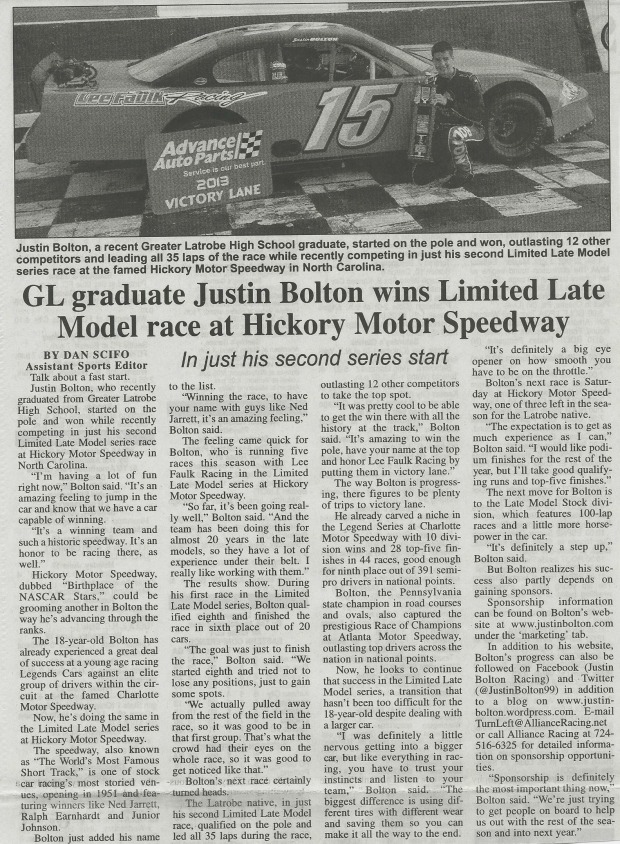 We traveled down south on Thursday, June 6. A tropical storm came through the area Thursday and Friday threatening to ruin the weekend. By Saturday, however, the weather cleared for the races.

During the two practice runs on Saturday, Justin was 4th fastest.

Justin went out second for qualifying. The car handled perfectly and Justin put down the fastest time. Be sure to view the video of Justin accepting the Pole Award

Justin led the field to the green flag. For 35 laps, Justin drove a perfect race. In only his second Limited Late Model race, Justin led all 35 laps to come away with the checkered flag. Watch a video of the race.

The Photos Page has all the pictures from the weekend.

Put your business name in Victory Lane . Justin’s next race is scheduled for June 29 at Hickory Motor Speedway. 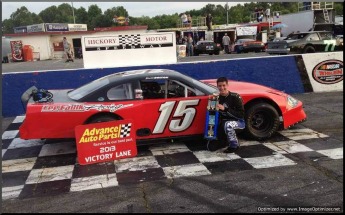 Saturday, May 11, was Justin’s debut race in the Limited Late Model at Hickory Motor Speedway. The day started out hot and sunny. The drivers were able to get in two practice runs and qualifying before the rain came. The car felt good, and Justin qualified 8th out of 20 cars for the feature. After a 3 hour rain delay, Hickory Speedway was able to dry the track and the Limited Late Models were the first race of the night. It was a 35 lap feature. With no rubber down on the track and a light rain falling, the track was slick. There were two cautions within the first 15 laps with Justin able to make it through both. The last 20 laps were run under green. Justin ran p6 these laps. The top 6 cars had a good straight-away lead over the rest of the field. Justin tried to get past the 5th place car but wasn’t able to make the pass before coming up on a lap car and the checkered flag. It was a good solid run for the first race. Thank you to everyone at Lee Faulk Racing for their hard work at the track. Justin is looking forward to the next race on June 8. Photos have been added from the weekend.

There are a lot of spots available on the car for company names. Justin is still actively seeking partners to add at least 2 more races to this season. Please contact Sherri by email at TurnLeft@AllianceRacing.net for more information.

Traveled down to North Carolina for Justin’s first Limited Late Model race at Hickory Motor Speedway this past weekend but event was canceled due to rain. Justin’s next race is scheduled for May 11.

Justin is actively seeking Marketing Partners for this season. We have put together a “Group Business Program.” If we can get 40 businesses from the area to contribute a one-time donation of $250 each, or we reach our goal of $10,000, this will allow Justin two additional races to add to his schedule this season.

With enough businesses participating, we will put the names of each business on the hood of the race car and place Pennsylvania on the sides of the car to promote the idea of area businesses supporting a Pennsylvania driver racing in the NASCAR Whelen All-American Series. It will definitely attract attention. Justin is the only driver currently racing at Hickory Motor Speedway from Pennsylvania . We may also print Justin Bolton racing T-shirts with the names of all participating businesses to help promote your business as well as to show your business is supporting a local student’s passion for racing. Your business website, if you choose, will be linked to JustinBolton.com as well as promoted through FaceBook, Twitter and YouTube.

Please contact Sherri at TurnLeft@AllianceRacing.net or by phone at 724-516-6325.

We are excited to announce Justin has committed to driving five races at Lee Faulk Racing. Justin will drive a Limited Late Model at Hickory Motor Speedway in North Carolina in the NASCAR Whelen All-American Series.

After such an impressive and accomplished year in Legend Cars last season, it is time for Justin to move up to the larger weighted cars to continue his climb through the NASCAR series. The NASCAR Whelen All-American Series is the first step when racing to the top levels of NASCAR.

Surrounding yourself with good people is essential to being successful in any endeavor.

• Marketing partners to help fund an additional 10 races for the 2013 season.

Marketing through racing puts your name out there week after week among some of the most loyal fans in sports. Using a young up-and-coming driver such as Justin creates a large following.

For the 2013 racing season, Justin has committed to 5 races at Hickory Motor Speedway in NC, “The Birthplace of the NASCAR Stars.” Justin will start out racing a Limited Late Model car #15 before moving up to a Late Model fielded by Lee Faulk Racing in the NASCAR Whelen All-American Series. Lee Faulk Racing has been in the sport over 19 years with notable drivers such as Nelson Piquet, Jr and Max Papis, a Championship season in 2011 and recommendations from Emerson Fittipaldi.

Surrounding yourself with good people is essential to being successful in any endeavor.

• the talent in Justin as the driver
• the 19+ years of experience and good equipment from Lee Faulk Racing
• the experience and contacts within the sport from ICON25 Motorsports Marketing, a professional marketing company assisting Justin with sponsor business-2-business opportunities within the racing industry.

• Marketing partners to help fund an additional 10 races for the 2013 season.

According to Performance Research, Marketing Analysis for Corporate Sponsorship of Sports and Special Events, fans were interviewed and “57% indicated that they had a higher trust in products offered by NASCAR sponsors.” They also reported that “71% will ‘almost always’ or ‘frequently’ choose a product involved in NASCAR over one that is not, simply because of the sponsorship.” Compare that to only “16% of the general public who holds a ‘higher’ trust in Olympic sponsors and only 5% who have a ‘higher’ trust in sponsors of World Cup Soccer.”

A sponsorship provides your business with logo decals on the race cars and on the car hauler but that is not all. Your business name will also be featured through on-line social media, Facebook, Twitter and Youtube videos. Your company’s website will be linked to JustinBolton.com.

It is all about creating a “buzz” or following around racing. Maximize the impact of your advertising by targeting a select group. Customers will soon relate your product with Justin’s race car and their experience with being at the track and/or following the races through social media.

Remember — even if you do not follow racing, what matters is that your current and potential new customers most likely do.

• “In 2011, 71 percent of avid fans said they were very likely to recommend NASCAR to friends and family. In 2012, it jumped to 78 percent, 82 percent among female fans.
• The avid fan’s use of social media sites is growing. According to the survey, 74 percent visit Facebook during a given month while 52 percent visit YouTube and 27 percent visit Twitter. Twitter use among avid NASCAR fans is up 35 percent over a year ago.
• Sponsor loyalty is still big in NASCAR. More than half (and 71 percent of 18-34) said they will support sponsors the longer they stay involved in the sport. In fact, 27 percent said they choose a favorite driver based on the sponsor.”

Racing is not just about driving the car, it is now about being a well-rounded spokesperson for a marketing partner. With a strong marketing partner behind him, Justin will be dedicated not only to his racing but also to increasing your brand awareness both on and off the track. Justin and the race car will be available for company events and/or charity functions to promote your business.

Running in the NASCAR Whelen All-American Series is the first rung of the ladder when climbing through the levels of NASCAR racing. As Justin excels through the different racing series, your business can continue to excel as well.

By partnering with Alliance Racing and Justin Bolton, you will help a young driver continue his racing career.

Please contact Alliance Racing at 724-516-6325 or by e’mail at TurnLeft@AllianceRacing.net for detailed information on sponsorship opportunities. There are different levels of sponsorship available to best fit your company’s needs.

To make a one-time donation, you may also visit www.gofundme.com/JustinBoltonRacing.