The final round of the 2016 NASCAR Peak Antifreeze Series was at Homestead Miami Speedway for 167 laps. Justin was running the pink #36 Alliance Garage Doors / C.H.I. Overhead Doors car for Breast Cancer Awareness month. He qualified p. 4 and quickly moved up to p. 2 but sustained significant damage early on lap 12. He battled back to finish p. 17. After missing 4 of 16 races, Justin still holds onto the NPAS license for next season by finishing in the top 30. Congratulations to teammates Dylan Duval and Kenny Humpe on top 10 finishes and Cody Byus on a p. 11 finish for this season. 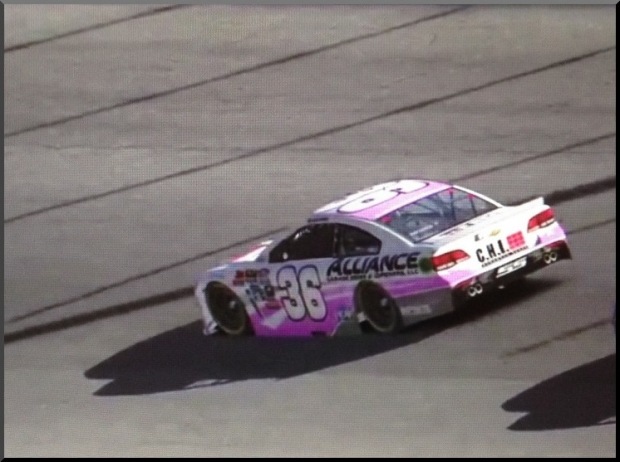 Tuesday, 10/6/2015, was the last race of the season for the iRacing 2015 NASCAR PEAK Antifreeze Series at Homestead Miami Speedway. This was Justin’s second season of competing with the top SIM racers in the world. After 15 races this season, Justin had 3 poles and 8 Top-10 finishes. With a few races this season of running out of luck and being in the wrong place at the wrong time, Justin came into the final race of the season sitting 7th in overall points. Starting on the outside pole with teammate Cody Byus on the inside, Justin was running strong up front. Half way through the race during a green-flag pit stop, a car spun bringing out the yellow catching Justin and Cody a lap down. With 80 laps remaining, Justin drove his way through the field to finish p. 14. Justin driving the #36 Alliance Garage Doors / C.H.I. Overhead Doors car completed the 2015 NASCAR PEAK Antifreeze Series with a Top 10 finish in 9th place overall. He is the second member of the TEAM to finish in the Top 10 with teammate Kenny Humpe winning the Championship. Both are guaranteed spots for next year’s Series. You can watch a replay of the race here.

Anderson Motor Speedway in SC held their final race of the season Friday, 9/18. There were 17 Legend car drivers in attendance for the 20-lap event. Justin qualified on the pole. There were a total of 5 cautions with 4 of them coming in the second half of the race. At the start, the #75 took the lead as Justin patiently stayed in the 2nd spot. At lap 5 Justin powered past the #75 to take back first. Justin had 5 perfect re-starts to maintain the lead throughout the remainder of the race. After the last caution with 3 laps remaining Justin had a strong lead on the remainder of the field taking the checkered flag. Watch the in-car video of the race here.

Without the funding to race the stock cars in 2015, we were able to pull together enough money to bring out the Legend car for some racing. Justin continues to prove that he has the talent behind the wheel. After not racing the Legend car on an oval track for over 3 years, Justin jumped right back in and was up to speed within the first practice. In 5 races, Justin had all top 5 finishes in the Pro Division with (1) win, (2) 2nd place, (1) 3rd, & (1) 4th place. The next race will be the US Legend Car Nationals held at Anderson Motor Speedway in SC November 12 – 14, 2015.

Traveled back down to Anderson Motor Speedway on Friday, 9/11. There were 18 cars in the field. The #99 was fast and Justin qualified on the outside pole. The track inverted for the race so Justin lined up p. 4. There was a quick caution on the first lap at the start. Lining up for the restart in p. 6, Justin drove up to p. 3 by lap 6 and p. 2 by halfway. The second half of the race saw 4 cautions. On lap 12 with Justin and the #8 side by side a caution came out. Lining up p. 2 for the restart there was a quick caution on lap 12 again. Starting p. 2 and running on the outside another caution flew on lap 13. Lining up again on the outside in p. 2 they were able to run 2 laps this time before a car’s engine let go. After a lengthy cleanup, Justin started p. 2. Going into turn 1 the car hit oil and spun. Justin was able to keep it out of the wall but would line up in the rear for the last 5 laps of the race. Drove up to finish p. 8. The #99 was the fastest car in the race as recorded in Race Monitor’s lap times. Had it not been for the oil left on the track, it would have been a great battle to the finish with the #99, the #50 and the #8. Watch the in-car video of the race here. 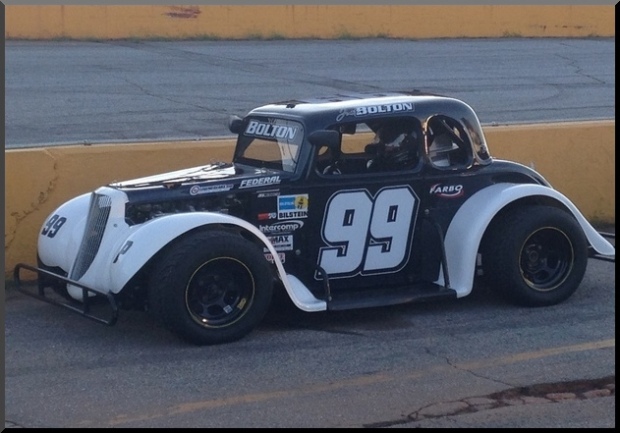 The NASCAR PEAK Antifreeze Series Round 13 was held at Phoenix International Raceway on 8/25. Justin qualified p. 12 for the 156 lap event. It was a caution filled race that did not work well with Justin’s race strategy. He was able to keep the Alliance Garage Doors / C.H.I. Overhead Doors #36 car in the top 15 for the majority of the race. After a green flag pit stop, the 5th caution flag of the race flew on lap 106 putting over 15 cars including Justin in the back of the field in p. 23. He was able to work his way forward into the top 15. There would be 4 more cautions in the last 30 laps of the race. Justin finished p. 15. A replay of the race can be found here https://www.youtube.com/watch?v=mf4u7AwkMqk. Next race will be at Darlington on 9/15.

Another fun weekend of racing. Justin was in the #99 Legend Car at Anderson Motor Speedway in SC for the 30 lap US Legend National Qualifier. The first practice run went well but a lug nut got stuck on the right rear. Thanks to Justin Ashley we were able to get that fixed and be on the track in time for qualifying. Justin qualified p. 5 out of 16 cars. After the first caution early in the race, Justin quickly moved up to p. 3 and chased down the front two cars. With two laps remaining, the second caution came out closing up the field. It was a close battle between the top 3 with Justin coming across the finish line p. 2. Congrats to Justin Ashley on the win. Farbo Motorsports took p. 1 and p. 2 again. Photos from the race and from the NASCAR Bristol race are on the Photos Page. Watch the in-car video of the Legend race on Justin’s YouTube Channel here. 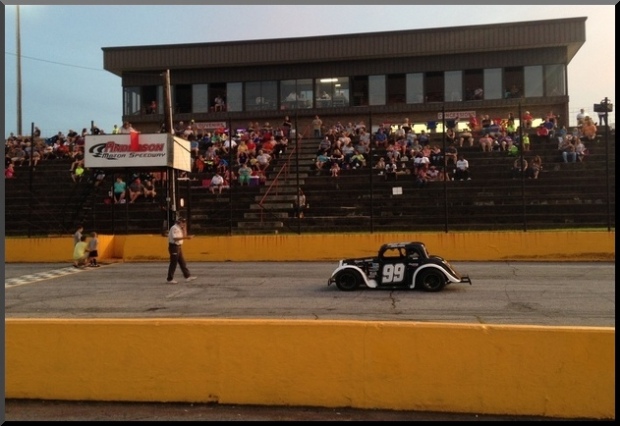 Justin was back in the #99 Legend car Friday, 8/14, racing at Anderson Motor Speedway in SC. There would be two 25-lap races. Justin qualified p. 11 for the first race out of a field of 25 cars. Justin steadily moved forward avoiding trouble with the six cautions of the race. By lap 23 Justin had driven from p. 11 to p. 5. A caution came out setting up a 2-lap shootout to the end. Running in p. 4 coming into turn 4, two cars collided in front of Justin causing Justin to spin to avoid hitting into them. All three cars had to go to the rear. With only two laps remaining, Justin crossed the finish line the last car on the lead lap.

At the beginning of the first race, all competitors’ tires were marked because the same tires were to be used for both races. The line-up for the second race was set by the finishing order of the first race. Justin lined up p. 19 out of 21. At the start of the race they could not get past lap 1. It was wreck after wreck. Finally, they were able to race to lap 4 before yet another caution. At this time, it seemed that things had settled down some and Justin started his run to the front. By lap 10, Justin was in the top 5. Just as the first race, a caution came out with 2 laps to go. Justin crossed the finish line p. 4. Farbo Motorsports finished p. 3 and p. 4 with both drivers coming up through the field using the same tires for both races. Photos from Friday are on the Photos page. In-car video from Race 1 can be seen here.

Error: Twitter did not respond. Please wait a few minutes and refresh this page.